The Map Is Not The Territory

Created and Directed By: Jen Harmon

The Mystic: Created and Performed by Jen Harmon

The act of carrying is to take support from one place to another. To contain, or be capable of containing. To hold.

“The Map is Not the Territory” was part of a 24-hour performance piece with Odyssey Works that navigated a single individual through a series of experiences designed around his aesthetics, interests, personal narratives, psychology and family history. For this production, I lead the participant on a two-hour walk spanning the length of Central Park, following many of its hidden paths. His experience was guided by my movements and gestures, and completed in silence. Throughout the entirety of his journey, the participant carried a round and heavy rock.

Along the way, he came upon strategically-placed friends of the participant, and they began to merge into our group. As each friend joined, we grew in size–walking all together in the quiet. About twenty blocks through the route, his friends began to disappear. One took the participant’s cell phone, another his keys, another his wallet, leaving him without his personal effects, and for us to continue.

In the second part of the walk, I created beautiful small moments for the participant to experience, from theatrical happenings to ordinary actions.

Some referred specifically to his life: three strangers sat on a park bench reading “The Primer”, a carefully-bound book the participant made for his friends composed of snippets of their conversations, writings, their ideas about life. Some were magical: along the path a group stood on top of a large boulder and opened brightly colored umbrellas all at once. A trio of dancers on a hillside danced to his favorite music. Others were ordinary: a sweeper swept up a field of wood chips, and a young woman talked heatedly on her cell phone. The piece also included live accompaniment and singing. These moments–intermixed with the happenings in the park–were viewed enthusiastically by onlookers. 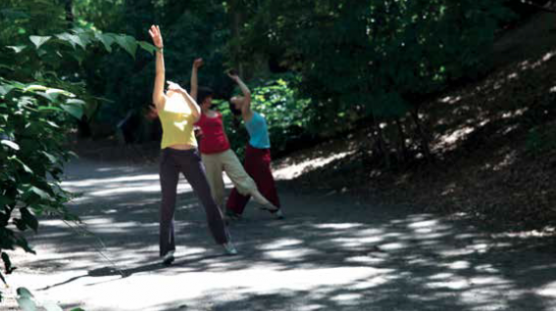