When I Left the House it was Still Dark

Dance on the Bridge:

“Dance on the Bridge” was made specifically for Rick Moody.

This piece began with the simple idea of a line. I wanted to work with “line” as both a formation, and the line of the human body or the highlighting of form. I was interested in how these conceptions of line might intersect with the compelling lines and soaring structure of the “iconic” Brooklyn Bridge. The piece developed to include consideration of the the forces inherent within our own bodies’ anatomical structure. These include weight, counter-force, gravitational pull, compression, tensile forces, and cantilever–which are the same mechanical principles inherent in the structure of the bridge.

The bridge takes us from one place to another, but it can also be thought of as a passageway where the integration of disparate elements of consciousness–or the compartmentalization of various experiences–has the potential to dissolve. It is here when we are neither at our origin nor our destination: a liminal space where possibility opens. The bridge, though, is not only a connector; it is a mode of communication emblematic of trust and support.

The dance’s minimal aesthetics, slow timing, and deliberate construction contrast with the pace of the runners, walkers and cyclists who regularly travel the bridge. They highlight the qualities of intentionality, inner sensation, aliveness in stillness, and movement in the piece. This piece also proved a delightful art experience for those “travelers” who eagerly stopped to view it. 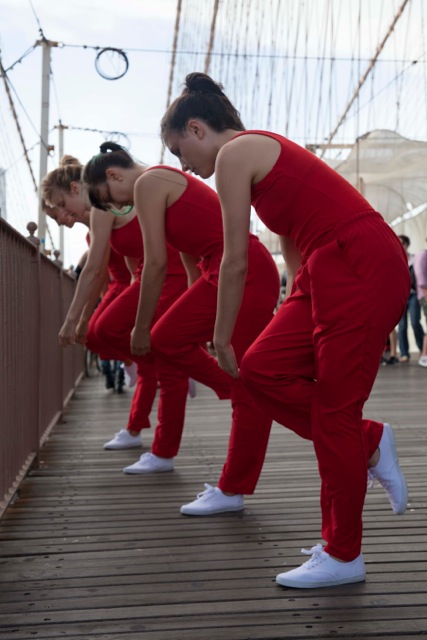 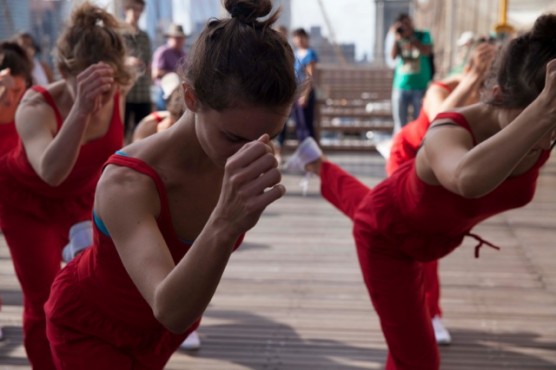 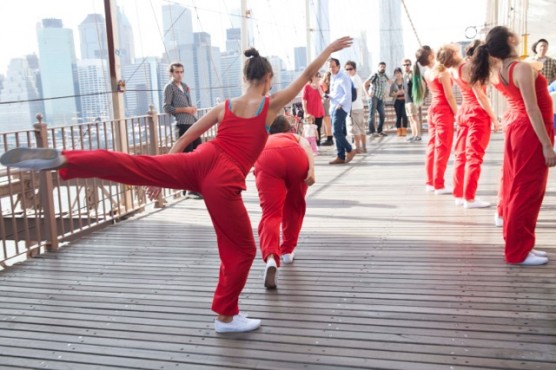 Created and Performed by: Jen Harmon

The fool trainings consisted of several private sessions where I led Rick through a series of movement explorations and playful vocal tasks in order to connect to one’s range of physicality, sensations and feelings.   Together we explored the wonder and beauty of our shared humanity.

I also led the public through a similar type of training in tandem with Rick’s training, so they could participate in the experience.  We wanted the public to contribute to making the Odyssey meaningful for Rick.  This can happen not by being merely observers of the action, but through engaging with the same narrative thread or mode of perception we are investigating with the participant.  As a result, everyone who comes in contact with the work has the potential to leave moved by the experience.

Through work with both the participant and the public I can make the intricate, intimate moments and large public scenes more effective.  This contrast in scale can change the impact of the art work.  For example, initially Rick and I were together on a street corner bantering about philosophical ideas, and then we turned the corner and suddenly happened upon an enormous crowd of fools–that initial reveal, even before the physical action began, was truly something to behold. 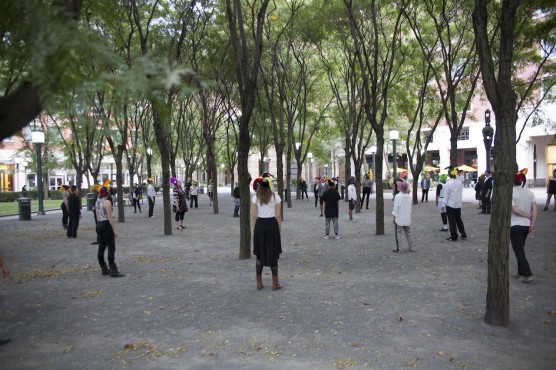 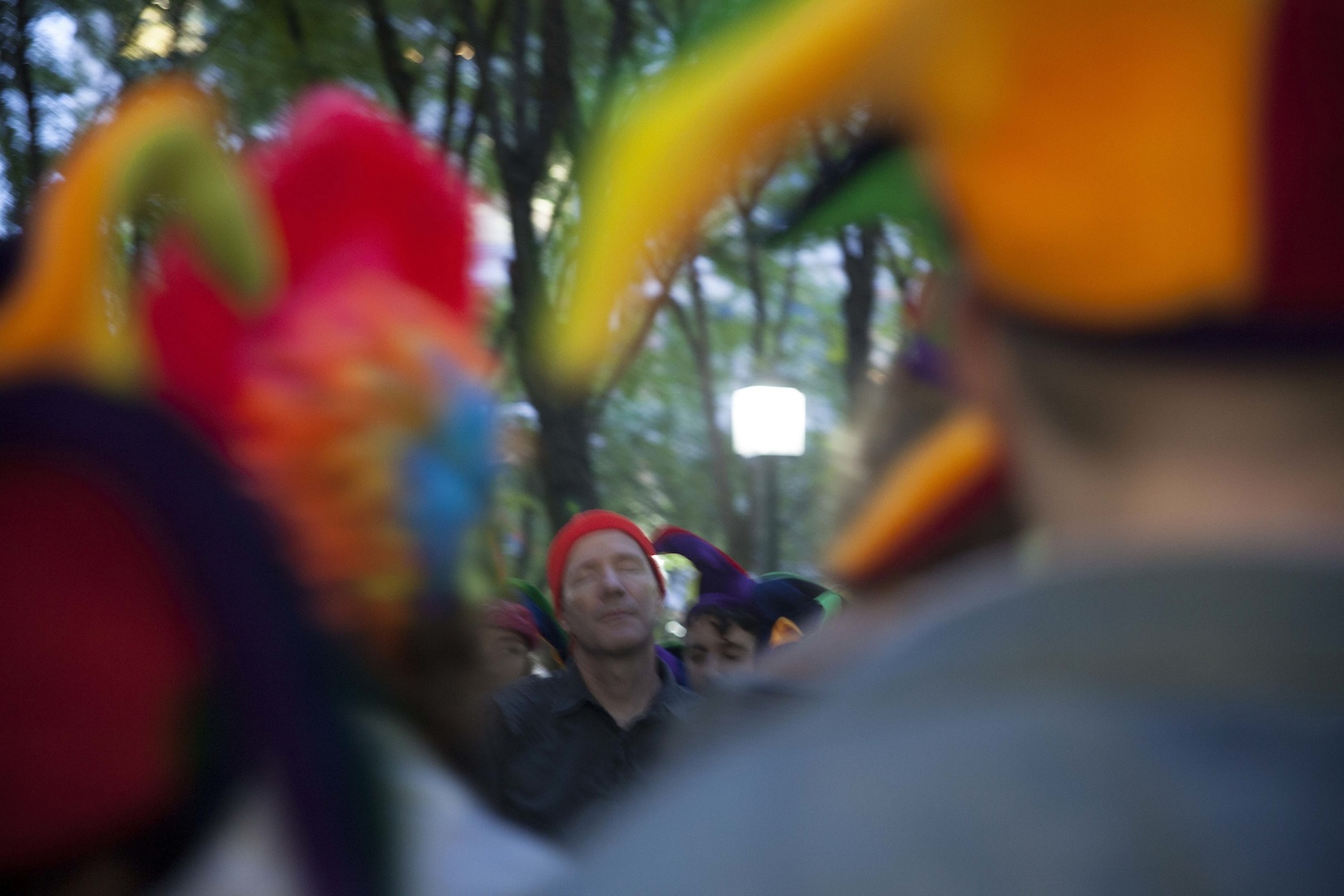 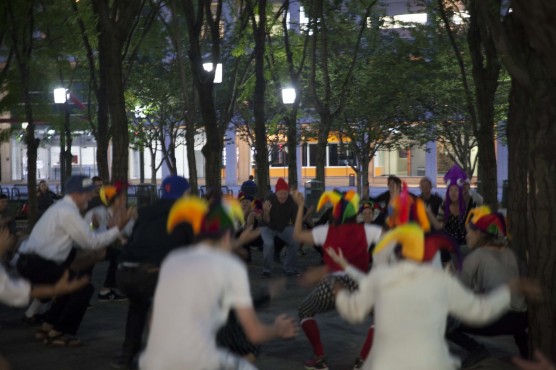 Improvisation at the 2/3 Station Transfer: 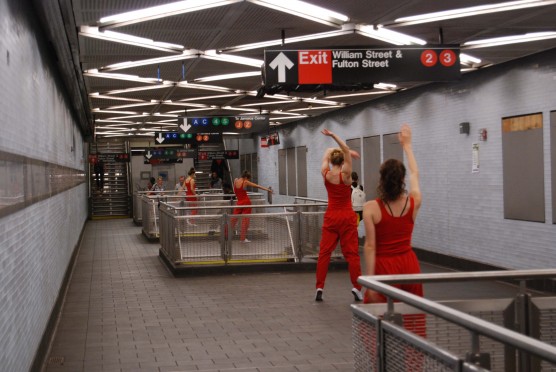